The Story of Duke the Dog's Near Drowning

While we were on a vacation, our world was turned upside down. This is the story of our pet puppy, Duke, and his near tragic experience.

It was a quite Sunday afternoon... the family's puppy just fell asleep lakeside. Not more than two or three minutes had passed, before Duke was noticed to have wondered off.

Of course, it might help to have a little background info. -- Duke is a very mellow dog. He rarely moves rapidly under any circumstance. So, there was no immediate cause for alarm; never-the-less, we quickly scurried down to the lakeside.

There Duke was found to have fallen into the lake. Though he is strong swimmer, there was no way for him to get out. He had managed to hold the top of his head for the entire episode. But, in his frantic struggle, he had taken a serious amount of water into his lungs and was expelling frothy, pink drainage from his mouth... indicating pulmonary edema had already set-in.

Pulmonary edema is when fluid in the lungs causes the collapse of the alveolar tissue. In common terms, this means his lungs were unable to carry oxygen. In Duke's case, he stopped breathing for several seconds after his rescue. Luckily, it was a nurse who pulled Duke out. She quickly revived him by compressing his chest and abdomen. Then, she put the dog in a "head down" position while the dog vomited, preventing Duke from aspirating on his own stomach contents.

Duke started breathing on his own again, but it was very labored. We quickly rushed him to the closest veterinary hospital, Mountain Shadow Veterinary Hospital (located at Routes 443 & 183 in Schuykill Haven, PA / Pottsville, Pennsylvania).

Being in such a rural location, we thought are chances were slim to find any help. We called the 24 hour emergency number posted on their door, and much to our delight we were quickly greeted by 2 doctors.

Though Duke was in critical condition, the doctors wasted no time caring to his needs. Additional tapping, or patting, was performed on the lungs by patting the area on his sides between his spine and ribcage. Next, an IV catheter was started so that Lasix could be administered. Lasix is a drug that help pull the fluid out of the lungs (and is primarily expelled through the dog's urine). X-rays were also taken to examine the extent of the damage to the lungs. The doctors then placed Duke in an oxygen tent to help increase the levels of 02 in his blood. After doing some research over the internet, the veterinarian in charge, Dr. Bruce Pederson, administered sodium bicarbonate to help treat lactic acidosis (the build-up of poisons in the bloodstream caused by lactic acid).

The truly marvellous part of the story is that Dr. Pederson went beyond the call of duty caring for the dog... 'round the clock on a Sunday night. We were given emailed updates every couple hours which contained words of encouragement, pictures and x-rays. This was especially comforting to the children.

Within twenty-four hours of the incident, Duke was well on his way back to normal. We hope this story may help others in several ways:

Multimedia of Duke and the Doctor 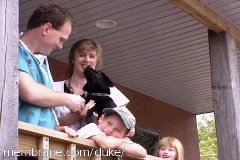 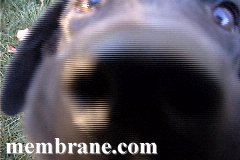 If you would like to contact us about our experience, or if you live in the Pottsville, Pennsylvania region and would like info. on the Mountain Shadow Veterinary hospital, please fill-in the following information:

Back To The Membrane Domain